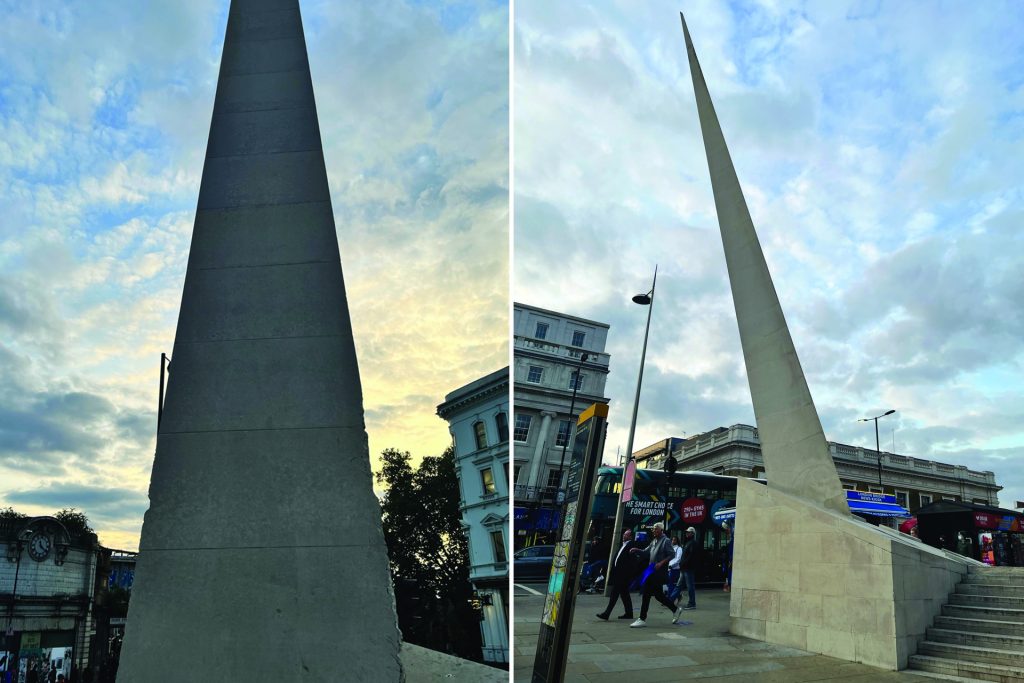 London is a treasure trove of hidden historical oddities. However, the Spike, located at the south-eastern corner of London Bridge, is admittedly more hidden in plain sight than it is conventionally tucked away. You might have walked by it on the way to the City, or given it a cursory glance as you legged it back to the station. Personally, I use it as a meeting spot – “look for the pointy thing!” But with no plaque or sign indicating what it is or why it’s there, Londoners have conjured up their own theories.

Erected in 1999, the Spike, or the Needle, stands at 16 metres high on the edge of London Bridge. It’s a mystery to most. One popular idea is that the Spike serves as a giant sundial. However, at 19.5 degrees, the structure is too shallow to be of any time keeping use. The second theory is a little more gruesome, which can’t come to any surprise given London’s fixation on the morbid.

The medieval London Bridge is famously known for the display of the severed heads of those found guilty of treason. Between 1300 and 1660, the bridge was littered with decapitated heads featured prominently on spikes, including those belonging to various household names – William Wallace, Thomas Cromwell and Guy Fawkes to name but a few. Paul Hentzner, a German lawyer, visited the bridge in 1598, and in an account of his travels stated that he counted “above thirty” heads at one time.  Sounds crowded.

The Spike is therefore viewed by many as a memorial or marker of this bloody period in the bridge’s history, representing the spikes used to display the unfortunate heads. Indeed, this theory is repeated by many tour guides, blogs, quiz masters and even The Daily Telegraph. But is it true?

Now the Londoner and Horrible Histories fan in me is always inclined to believe and champion the more gruesome theories. However, if you go straight to the source, Eric Parry, the Spike’s architect, he gives us the true intention of the structure.

It transpires that the Southwark Gateway Needle, the structure’s official name, does not act as a visual reminder to London’s violent past, but is a marker to a specific spot. According to Parry, if you were to follow the trajectory of the Spike, you would see that it “pierces the ground around the point of termination of the old London Bridge” located by the riverbank opposite St Magnus the Martyr church. To Parry, the Spike is “a reminder of the extraordinary history of this threshold, the front door if you like from Europe and the world to the City of London”.

This might not be a spooky end to the mystery of the London Bridge Spike, but I think it’s an enjoyable example of the urban myths prevalent throughout London, and how we are forever intrigued by the macabre history of this city and its landmarks.

Hampden Agencies announces appointment of Lord Strathclyde to HAL board